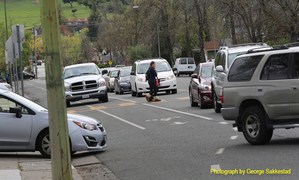 In response to neighbors' concerns, the Campbell Union High School District has asked the city of San Jose to do a comprehensive study of traffic and parking around Leigh High School.

In response to neighbors' concerns, the Campbell Union High School District has asked the city of San Jose to do a comprehensive study of traffic and parking around Leigh High School.

Neighbors told the district's board of trustees on March 3 that motorists double-park or park in bicycle lanes along Los Gatos-Almaden Road, block driveways, park on their lawns or shrubbery, and make illegal U-turns on busy streets.

They said the traffic and parking not only is a nuisance to them but also a danger to students walking to school.

Assistant superintendent Brett McFadden said the traffic issues have been ongoing since the 1990s. "I think the residents have a valid concern," he added.

In their discussion about what to do, trustees agreed the students need safe routes to the high school and noted that Lonehill Road doesn't even have sidewalks for them to use.

Because any street, sidewalk or parking improvements would have to be done by the city, however, the district sent a request to the San Jose Department of Transportation for a traffic study and brought the issue to Councilman Donald Rocha's attention.

"We don't have the authority, but we can be helpful," McFadden said.

While the school district waits for the city to respond and do such a study, the district will monitor some of the short-term measures it began implementing earlier this month.

Those include a new student drop-off policy, adding new pedestrian crossing signs and repainting crosswalks with the city's help, according to Leigh High School principal Pam Hoult. San Jose and Los Gatos police officers meanwhile have started to patrol around the school in the mornings to monitor traffic.

Parents can either drop off students at a parking lot in front of the school on Leigh Avenue or at the school side of Los Gatos-Almaden Road. The school also is asking parents to stop making illegal U-turns and cutting through nearby neighborhoods to get back onto Highway 85.

"We're trying to address the factors we can," said Peter Feng, the district's communications director.

McFadden said some residents near the school contend the traffic has gotten worse since the new drop-off policy was initiated, but Hoult noted it'll take some time for parents to adjust.

"It's a work in progress," Hoult said.