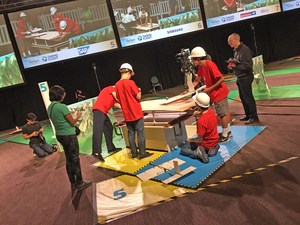 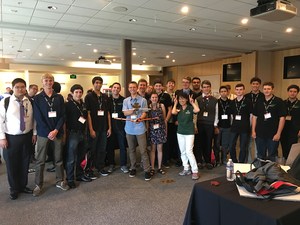 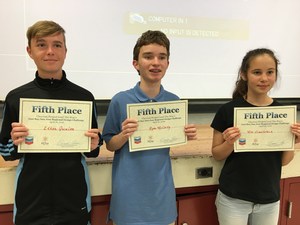 Students in Gina Bui-Le’s Project Lead the Way (PLTW) engineering class at Leigh High School had a series of impressive performances in three science, technology, engineering and math (STEM) competitions taking place in the spring of 2016.
According to Bui-Le, Project Lead the Way is a nonprofit organization that partners with local schools, universities, and businesses to provide STEM instruction to students (Xilinx, CUHSD, SJSU).

“This is the year we are having our students stepping up and taking on challenges from different levels, and we are very excited that all our teams placed in three different categories,” said Bui-Le.

In a Capstone Project Showcase event sponsored by Xilinx Corporation on April 12, 2016, a PLTW team comprised of seniors David Baerensteicher, Jack Leckrone, and Aaron Schultz (Team Acting Sun) came away with first place after twenty engineering teams from Branham, Westmont, and Leigh vied to see who could come up with the best mechanical engineering design to solve a real world problem.

While Xilinx scientists and engineers, who acted as the contest judges, came away impressed with the variety of ideas on display, they felt that Team Acting Sun’s hand-operated, bicycle turn signal system was both practical and the most well-designed.

Using a switch mounted on the handle bars, the turn signal system allowed bike riders to operate two blinking arrows mounted on a horizontal bar behind their feet to signal a direction change. The system solved the dual problem of traditional hand signals being too hard to see as well as their potential for compromising the rider’s control of the bike.

A few days later on April 16, a team of freshmen in Gina Bui-Le’s introduction to engineering & design class placed fifth in the Chevron Design Challenge. It was the first time that Leigh had ever participated in the event.

This year’s competition took place at Amador Valley High School in Pleasanton with PLTW teams from Salinas to San Francisco. Teams were tasked with creating an original design for a portable and environmentally friendly barbecue grill with a seating capacity of two. Winners of this Bay Area regional would advance to a state level competition against the winners of a Sacramento regional and a Southern California regional.

Working from 8:00 to 3:00, students used AutoCAD software to create sketches, assembly drawings, parts, and even 3D models of their projects. These were submitted for judging at certain points throughout the day. The students were also required to give a short presentation of their design concepts at the end of the day to a panel of engineers from Chevron and other sponsoring companies such as Cisco, Intel, and Pacific Gas & Electric.

In response to this challenge, Leigh’s freshmen team created a modular design of six blocks composed of easy-to-clean materials that could be assembled into different sizes like legos.

The focus of this year’s event was to design a glider or airplane that could land on a designated target after carrying a payload to a certain altitude. More than 2,000 students representing about 280 teams from schools across the Bay Area participated. Leigh fielded four teams for the school’s first foray into the contest.

“Many schools have done the Tech Challenge before,” said Bui-Le. “We’re proud to stand shoulder to shoulder with students from all over the Bay Area including the returning champs from Cupertino High and Monte Vista. We had a great experience learning STEM.”

Leigh’s winning team (Team Height & Glide) consisted of senior Mario Cristiani and freshmen Miles Drake, Aris Luk, and Eitan Sahnovich. They successfully landed their glider on the target three times, touching down on the bullseye two out of three times.