2016-17 School Year Gets Underway with Professional Development for Teachers 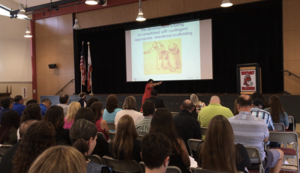 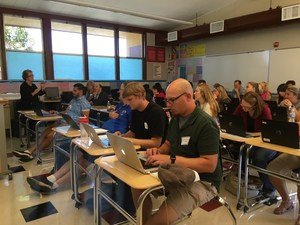 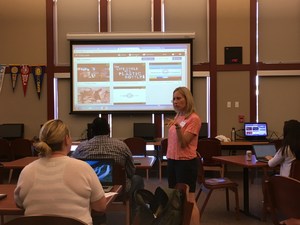 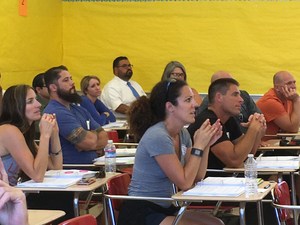 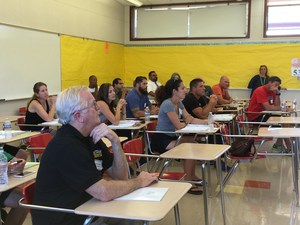 A round-up of CUHSD's August 15, 2016, professional development day for teachers
Campbell Union High School District (CUHSD) officially kicked off the 2016-17 school year at Westmont High School on August 15, 2016, with professional development day for teachers, an annual event that brings the district's educators together for a day of learning and collaboration.
The day started with a bang as CUHSD's new Superintendent Robert Bravo was introduced to the crowd of more than 350 teachers and administrators via a carpool karaoke video.
Afterwards, CUHSD School Board President Linda Goytia and Del Mar High's Laura Hallinan, CUHSD's 2016 teacher of the year, warmed up the crowd by speaking of their excitement about the coming school year.
Bravo then followed up with a short speech in which he reinforced the importance of the teachers' role in the classroom.
"There's nothing more important than the work you're doing," said Bravo. "I'm there just to listen and to think of ways in which I can help make your job easier."
The day's keynote speaker, Aida Walqui, WestEd's director of teacher professional development spoke next.
She provided the audience with a preview of her Quality Teaching for English Learners (QTEL) project and talked about how the development of autonomy, agency, and voice in students informs their growth as citizens.
"They are trying to communicate ideas, and we stop them in the middle of that, because we want to correct the form of the language, so one important lesson is that on our way to getting better, we will not pay attention so much to the container," said Walqui, "but we will pay a lot of attention to the content, because it is about content, and that is what is going to really create major changes in your students."
The group then broke up to take part in a series of workshops on various topics ranging from the use of technology in the classroom to building academic literacy to theatre safety.
Many of the trainings were created, designed, and led by the teachers themselves.
"We learned so much!" said Jeff Bengford, Westmont High's theatre arts teacher.
Print