CUHSD in the News: Campbell teen recognized for recycling, donating proceeds to nonprofits 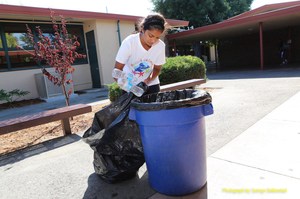 Sonali, 16, collects discarded plastic bottles, cans and glass containers and redeems them at a local recycling center for money for her nonprofit, Recycling4Smiles. The money is then donated to other nonprofit programs benefiting children.

For her work, she recently received a Jefferson Award, which recognizes local individuals who have committed themselves to public service.

Sonali’s trash dives began soon after she received a Christmas gift from her parents in 2011.

“My parents gave me $100 and told me to use it to make a difference in someone’s life,” Sonali said in an interview.

At the time, Sonali decided to donate the money to Smile Train, a nonprofit that works to perform surgeries on children born with cleft palates in underdeveloped countries. However, she needed an additional $150 for the donation to result in a surgery.

She collected plastic water bottles, soda cans and glass bottles for two months at home and from her neighbors until she had enough to make the full donation.

After that first donation to Smile Train, Sonali decided to keep collecting recyclables to help others in need. At age 11, she started Recycling4Smiles.

“After making my first donation to Smile Train, I just felt so happy,” she said. “I wanted to do it again.”

Last year she started a Recycling4Smiles club at Del Mar High that sees roughly 15-20 students on the hunt for recyclables. Sonali said friends, family members and businesses also donate recyclables to the organization.

Bags of bottles and cans are now commonplace in Sonali’s life.

“Sometimes our neighbors will leave bags on our doorstep,” she said. “We store the bags in my garage, and the janitor lets us store some bags in the closest area they have.”

Every week, she and her mother go to a local recycling center to separate the recyclables and collect money. Sonali says she would like to create a Recycling4Smiles program that could be easily implemented at others schools within the Campbell Union High School District.