CUHSD in the News: Theater teacher sharing tricks of the trade with students 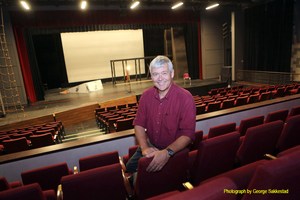 At age 55 and with decades of acting experience, Kurt Meeker still gets butterflies in his stomach when he steps out onto the stage.

Those butterflies, he tells his Prospect High School theater students, can be a tool for a better performance.
Meeker is getting the next generation of actors ready through his teaching, rooted in real world experience. He has been teaching for 16 years, with 12 of those years at Prospect.
By day, Meeker shares his theater wisdom with students at the Campbell Union High School district campus. But in his off time, he still steps out on to stage to perform. He has been acting since he was a senior in high school.
“I was a senior in Edmonton, Alberta, in Canada when I was in ‘Bus Stop’,” Meeker said in an interview with this paper. “That’s what got me started.”
Meeker shares plenty of examples and experiences to his students. Those stomach butterflies he says he gets on stage? He tells his students those are part of the excitement that comes with going on stage in front of an audience, and that energy that can be channeled into a performance.
“That’s the energy you need,” Meeker said.
Meeker is currently performing for the Santa Cruz Jewel Theatre Company in “A Streetcar Named Desire” as Mitch. The final performances are Sept. 30-Oct. 2.
“I find that when I’m in a role, I can relate to the students when they’re learning and using the techniques I’ve shown them,” Meeker said, adding that he likes to see his students’ growth in not only acting but in public speaking.
“I can see the growth from freshmen year to senior year,” he said. “Nothing scares them anymore. They’re so comfortable in their skin.”
The Santa Cruz resident has had roles in independent films, television series and national commercials for Charles Schwab and Pacific Bell.  Meeker had a part in “Six Against the Rock,” a 1987 drama about a prison revolt on Alcatraz. He also worked on the short-lived TV show “Starman,” a continuation of John Carpenter’s 1984 film of the same name.
“I do have enough experience that I can not only give cautionary warnings, but channel [students] into directions that are going to be the most productive depending on who the student is,” Meeker said.
As he prepares for the curtain to draw for his role in “A Streetcar Named Desire,” he’s working with his students on Prospect’s production of Shakespeare’s “The Tempest.”
Patrons will find a unique twist on the play when it opens Oct. 7. The setting take place years after global warming has taken its toll on the Earth. Gender-specific roles have also been changed.
For more information about Prospect High’s theater arts department, visit Facebook.com/ProspectHighSchoolTheatre.
http://w.mercurynews.com/2016/09/29/theater-teacher-sharing-tricks-of-the-trade-with-students/ Source: San Jose Mercury News
Print