You Matter More Than You Can Possibly Imagine 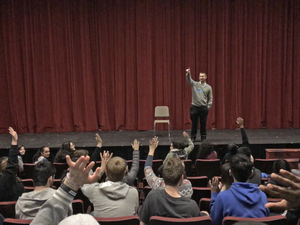 Toch, who was born with cerebral palsy, urged the audience to make the most of their time on Earth and offered insights that spoke directly to special education and non-special education students alike.

As a student in elementary school and later at Live Oak High School in Morgan Hill, Toch experienced bullying.

Despite this, he went on to join the cross country team and, as a sophomore, took third place in a speech contest in which he talked about how he’d been bullied because of his disability.

This experience helped Toch realize the power of public speaking and prompted him to start the nonprofit organization Mind Before Mouth to educate the public about the effects of bullying.

Several years later, when Toch was 18, he received an apology from one of his high school tormentors who’d attended one of his talks.

“At the end of this,” said Toch, “he comes up to me with tears in his eyes, and he says, ‘Joshua, I am so sorry for what I did,’ and I ask him why he did it. . .He said two reasons: one is that he was diagnosed with a learning disability, and he didn’t know how to come forward, and he thought if he picked on me more, his problems would just go away. . .and the second was actually kind of comical. . .I was really good friends with his girlfriend, and he thought I was a threat.”

Toch advised students who had experienced bullying to speak up, to cultivate a relationship with at least one teacher, and to seek out that teacher and tell them what was happening to them.

He also talked about feeling lonely growing up, and he encouraged students not to let fear stop them from accomplishing their goals.

Branham’s Best Buddies Club has been active since 2005. The club meets every Wednesday and is the largest offshoot in Northern California of Best Buddies International, a nonprofit organization dedicated to educating the public about individuals with special needs and creating opportunities for friendship, employment, and leadership development for people with intellectual and developmental disabilities.

Joshua Toch is currently a sophomore at UC Berkeley where he studies business. His public speaking engagements have taken him around the country and enabled him to meet a variety of people including members of Congress members and President Obama.
Print