CUHSD in the News: ‘Tis the season of school crab feeds 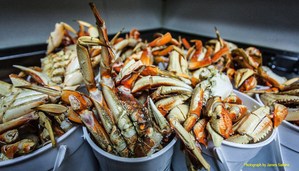 Grub out at Branham High School's annual crab feed fundraiser.
Original article by Julia Baum in San Jose Mercury News
With crab season in full swing, San Jose residents will get several upcoming opportunities to indulge in the sweet shellfish–and all for a good cause, no less.

Whether you like to dunk, drench or drown your crab in melted butter, the Branham High Sports Boosters and the Willow Glen Performing Arts Boosters both are hosting crab feed fundraisers Jan. 21 that are sure to satisfy.

There should be “probably about two to two-and-a-half pounds of crab” for each person at the Willow Glen Performing Arts Boosters Crab Feast and Auction, Boosters president Loris van Ark told the Resident.

“If we get about the number of people we expect, we’ll probably go through 500 pounds or more,” van Ark said. “For some people it’s quite important, it’s the primary food.”

“We were able to purchase keyboards that hook up to their computers and they were able to add music class for all the sixth graders to go to,” she said. “From now on we’ll be able to introduce music to every student that starts at the middle school.”

Not to be outdone, Branham High School’s sixth annual all-you-can-eat crab feed raises money to support its 18 sports teams. The feed sold out last year, with about 260 attendees, and the school expects it to sell out again this year.

“It’s grown quite a bit since we started,” Branham High athletic director Landon Jacobs said in an interview. “Last year in ’16, the profit from the event was about $12,000.”

Just to be safe, organizers are buying more crab meat than last year and 50 sticks of butter–plus 400 pads of butter for the bread.

“Last year we did 770 pounds of table-ready crab and this year…we’re going to look at 800 pounds,” Branham Sports Boosters President Dan Seaone said in an interview.

Eaters are guaranteed to leave feeling full, with 50 pounds of pasta, 10 pounds of ground meat and seven pounds of sausage also being offered.

Branham students will work as servers during the feed, making sure everyone has plenty of butter, lemons and napkins, while some parents will volunteer behind the scenes doing prep work.

Because of the feed’s growing popularity, Branham has “kicked around the idea” of moving it off-site like its annual Casino Night fundraiser, according to Jacobs. For now the school is keeping it at the campus cafeteria and looking for different ways to increase profit from the event. In recent years, guests have started buying necklaces for the waiters; those with the most necklaces at the end of the night win prizes such as gift cards.

“It’s just a really nice community event,” said Seaone, who enjoys watching the school commmunity gather to put on the event. “Everybody comes in and helps support the athletics program.”

Leigh and Pioneer high schools also have crab feeds coming up later in the season. Leigh’s feed is on Feb. 11 and Pioneer’s on March 4.

Branham High and the Willow Glen Performing Arts Boosters crab feeds are on Jan. 21. The Branham feed is from 6 to 9 p.m. inside the Branham High school cafeteria, 1570 Branham Lane. Tickets are $50 each. Online donations can be made at branham.cuhsd.org/apps/pages/giving_to_branham. The Willow Glen feed is from 6 to 10:30 p.m. at the Scottish Rite Center, 2455 Masonic Drive. Tickets start at $85. Donations to the Willow Glen Performing Arts Boosters can be given at wgpab.org.
http://www.mercurynews.com/2017/01/18/tis-the-season-of-school-crab-feeds/ Source: San Jose Mercury News
Print