Upon the release of the 2020 U.S. Census, school districts that use by-trustee area elections are required under Education Code section 5019.5 to evaluate whether the current trustee areas have approximately equal populations using the new census data. The variation in total population among trustee areas generally should not exceed 10%; any percent of variation lower is legally presumed to be acceptable, absent extenuating circumstances. If the total peak variation is less than 10%, no changes are generally legally required. If the total peak variation exceeds 10%, existing trustee area boundaries may need to be adjusted. This process is referred to as redistricting.


The District hired professional demographers SchoolWorks, Inc. to conduct a study of the recently released 2020 Census data to determine whether the current trustee areas are population balanced. After evaluating the data, SchoolWorks, Inc. determined that the District’s total peak variation is only 5.94%, and the District, therefore, is not legally required to make any adjustments to the current boundaries. SchoolWorks, Inc. presented the findings of their study to the Board and community at the December 2, 2021 Board meeting. After this presentation, the Board held a public hearing to gather community input regarding the demographers’ finding and the District’s trustee areas. Following the public hearing, the Board adopted Resolution #26-12-02-21, approving the maintenance of the boundaries of the District's existing trustee areas.

Frequently Asked Questions
Why is the Board of Trustees deciding on an election map during the summer?
Over the past school year, the District has explored transitioning from an “at-large” trustee election system to a “by-trustee area” system. During the fall semester, labor partner Campbell High School Teachers Association (CHSTA) encouraged the Board of Trustees to consider moving to a by-trustee system. Soon thereafter, the Board of Trustees learned that the City of Campbell had received a demand letter from a legal firm alleging that the city’s at-large method of election violates the CVRA. And, on January 15, 2019, Campbell’s City Council adopted a resolution of intent to transition from at-large to District-based Elections pursuant to California Elections Code Section 10010(e)(2).  After further study and in advance of receiving a demand letter, the District passed a similar resolution on May 16, 2019, in part to avoid possible litigation. By law, the process to establish the required election area maps must be completed in 90 days, so the District was required to conduct the process of examing draft election maps during the summer recess.

What’s the difference between at-large and by-trustee area elections?


Campbell Union High School District has always had an at-large election system, where voters of the entire District elect members to the Board of Trustees. The District has initiated the process to establish election areas (trustee areas) that would be roughly equal in population and in compliance with California Voting Rights Act (CVRA), the Federal Voting Rights Act, and the United States Constitution.  Using census data, the District’s demographer, National Demographics, Inc will create conceptual trustee area scenarios that divide the District into five new voting areas.


Will this impact where my student goes to school?


No, the district’s transition from at-large to by-trustee area voting will have no impact on school attendance zones.


Will the transition impact the representation of parent voters in the District?


The transition from the at-large election system to the by-trustee election system will not impact the number of voters or parents within the District's boundaries.  Every four years registered voters in the Campbell Union High School District will have the opportunity to vote and decide on one candidate for the Board of Trustees. The main difference is voters will only be able to vote for one candidate based on their trustee-area. We are committed to establishing trustee areas that will offer equal representation across our school district to ensure our Board of Trustees is representative of our community's diversity and interests.


Why choose to move to by-trustee area voting?


The Board of Trustees made the decision to transition to the by-trustee election system to ensure compliance with the California Voting Rights Act (CVRA). Recently, many cities, school districts and other public entities have been challenged under the California Voting Rights Act (CVRA), leading to very expensive and divisive litigation about their election process. The CUHSD Board of Trustees are committed to avoiding expenditures that do not directly benefit the children, families, and communities we serve. While CUHSD believes its elections have not been racially polarized, a move to by-trustee area elections enables us to prevent costly litigation in the future and ensure compliance under the law.


What is the CVRA?


The California Voting Rights Act (CVRA) prohibits the use of any election system “that impairs the ability of a protected class to elect candidates of its choice or its ability to influence the outcome of an election.” Jurisdictions can be sued if they elect their governing body using an at-large, from districts, or mixed election system. If the court finds against a jurisdiction, the jurisdiction must change its election system and pay the plaintiff’s attorneys, experts, and other expenses.


What criteria are used to create election districts?


Many factors may be considered, but population equality is the most important.

Other factors are used in the creation of election districts including:


How can I get involved and influence the trustee areas?


The process will include hosting a series of public meetings to collect community input regarding the proposed area maps and allowing community members to view the conceptual trustee area scenarios and provide comments. Following community input, it is anticipated that the Board of Trustees will choose the final map at a meeting in the Summer of 2019.


How will creating voting districts affect me?


During every election cycle, registered voters in the CUHSD will have the opportunity to vote for a candidate for School Board who lives in their trustee area. Registered voters will not be able to vote for school board candidates from areas in which they do not reside. 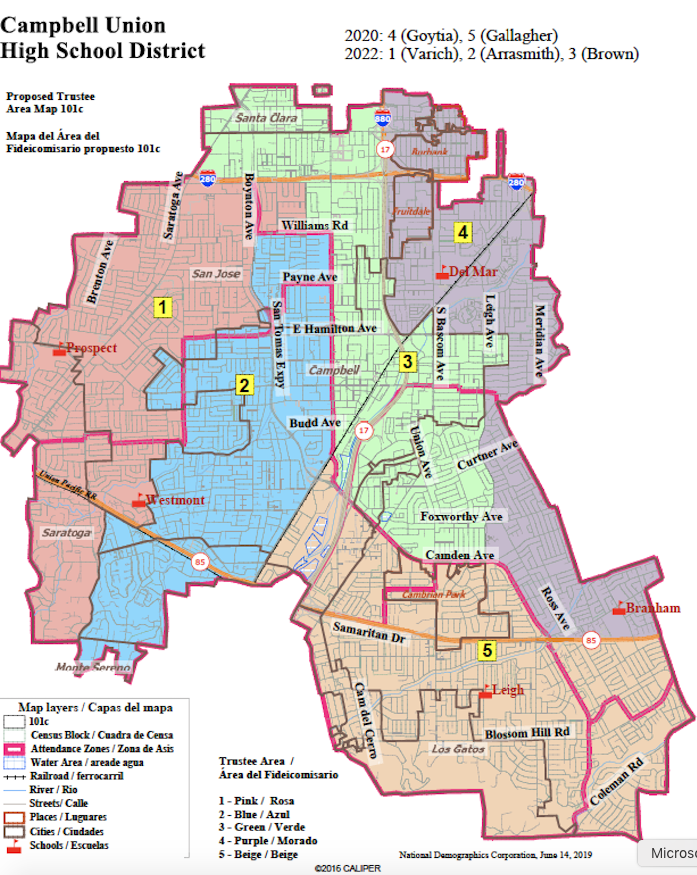 July 25 Board Meeting
During the July 25 Regular Board Meeting, the Board of Trustees continued the transition process from at-large to by-trustee-area Board elections by selecting map 101c as their preferred trustee-area map and adopting Resolution #02-07-25-19, approving the transition to trustee areas. The decision was made after conducting five public hearings and receiving community input over the last two months. The preferred map and resolution will now be submitted to the Santa Clara County Committee on School Reorganization for final approval. The County Committee meeting will be held on August 12 at 5:00 p.m. in the CUHSD Board Room. To view the public hearing notice and agenda, click here.

June 13 and July 11 Board Meeting
During the June 13 Board meeting, a demographer presented the first set of proposed trustee-area maps, Maps 101, 102 and 103, which can be viewed below. The Trustees then held the first of two statutorily required public hearings to receive community input on the maps and the proposed sequence of elections. After reviewing the proposed trustee-area maps at the first public hearing, the Trustees requested that the demographer create additional maps for consideration ahead of the next public hearing on July 11.  The demographer has now prepared four additional proposed trustee-area maps for consideration, Maps 101b, 101c, 101d, and 103b, which can also be viewed below.
To see the entire demographer presentation from the June 13 Board meeting, click here. During the July 11 public hearing, the Board selected Maps 101b, 101c, 101d, and 103b as their focus maps. One map will be selected by the Trustees at the July 25 meeting to move forward to the County Committee on School District Organization.

May 30, 2019, Special Board Meeting
During the Special Board Meeting on May 30, 2019, the Trustees adopted two resolutions in relation to the by-trustee election transition process after three public hearings. The first resolution established criteria that will guide the demographer and District staff in the development of draft trustee-area maps for Board and public consideration. To see the full resolution including the established criteria decided by the Board, click here.
To avoid costs and to ensure timely implementation, the Board adopted a second resolution that authorizes the Superintendent to seek a waiver from the State Board of Education on the election requirement to approve a transition from an at-large election to a by-trustee-area election. To read the full resolution, click here.
To see the live-stream video from the meeting on May 30, 2019, please click on the link below.

May 23, 2019, Special Board Meeting
The Trustees held their first public hearing to receive community feedback regarding the CVRA and the potential design of maps that outline trustee-areas for board elections during a special board meeting on May 23, 2019. To see the live-stream video from the meeting on May 23, 2019, please click on the link below.
https://youtu.be/DKVC38xNNTo 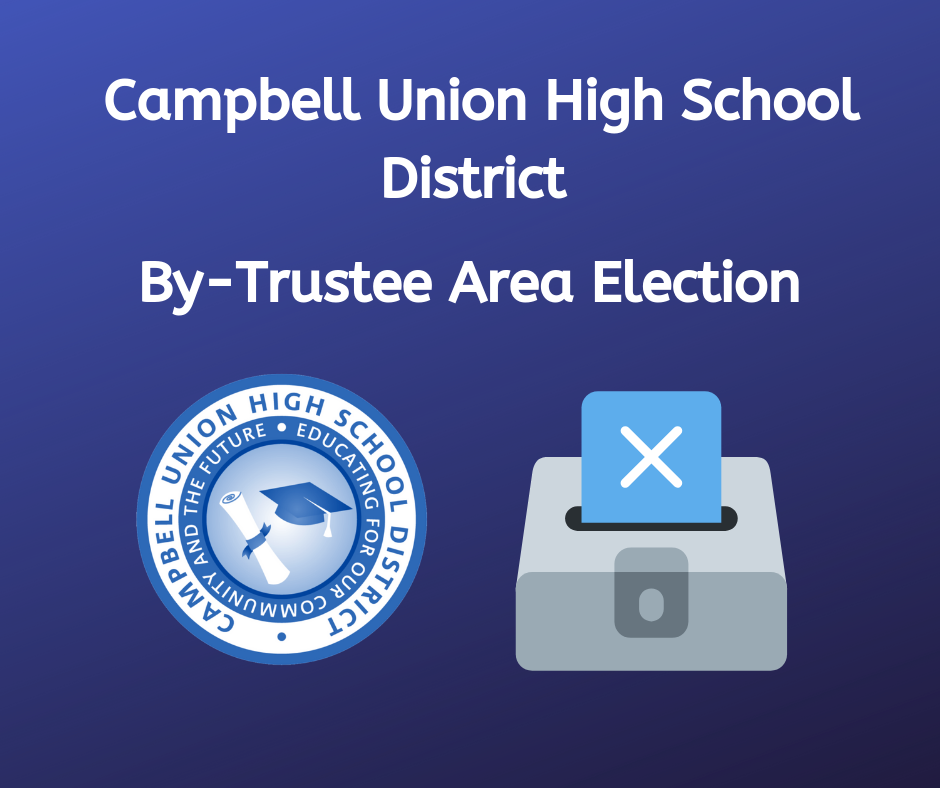